Review (of sorts): The Pillowman 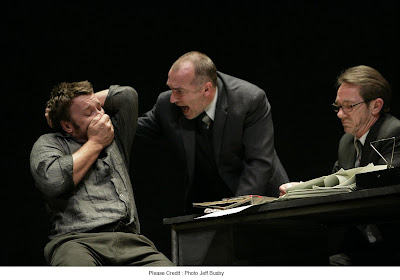 It's rare that I walk out of live theatre, at least in comparison to films, which I am wont to abandon should I find myself hating the movie I'm watching. This is because I know the actors won't be hurt by seeing me get up and walk out in a cinema, as they can't actually see me, not being present except as two-dimensional representations. It's also because I tend to see more film than theatre, and after years of film festivals, have less qualms about debating the merits of sticking it out vs wasting my time on an unenjoyable experience.

When my old friend Sean and I went to see the latest MTC production on Thursday night, Irish playwright Martin McDonagh's The Pillowman, I didn't walk about as such, but I didn't go back into the theatre after interval.

In part this was because I was tired, and The Pillowman is a long play; two and a half hours. It was also because I found myself really disliking the production.

I definitely think the play needed editing; scenes felt padded and stretched out, especially some of the early scenes where the writer, Katurian K. Katurian (Joel Edgerton) is being interrogated by the police on charges he was initially unaware of. In a fascist police state, such a concept of course is totally credible, although the actual characters of the police, the bad cop (Greg Stone) and the good cop (Kim Gyngell) were far from credible, being overplayed and underdeveloped.

As the play unfolds we learn that Katurian has been pulled in due to certain key similarities between scenes in his stories (most of which are unpublished, and almost all of which involve nasty things happening to small children) and the recent murders of two children. A third has gone missing. Also arrested is Katurian's brother, Michael (Dan Wylie), who suffers from a 'learning disability'. It's not long before a post-torture Katurian is thrown into the same cell as his brother, whereupon we learn that as children, the pair were tortured and abused by their parents as part of a twisted social experiment which left Michael mentally and physically damaged, and which led Katurian's imagination down a very dark path.

What especially irked me about the play was its direction by MTC Artistic Director Simon Phillips, which confirms my opinion (developed by watching his productions of Tomfoolery and Entertaining Mr Sloane) that Phillips is incapable of successfully directing satire. This production has all the subtlety of a skinhead on a rampage, which rendered unfunny scenes amusing, and actually funny lines leaden or ineffectual.

Too many of the characters were overplayed, both the aforementioned policemen, and particularly Wylie's portrayal of Michael. To his credit, Wylie does the best that he can with the role, which he appears to have been ordered to play with an exaggerated grotesquerie. It didn't need to be so heavy-handed, complete with limp, twisted hands and exaggerated delivery of lines; some restraint would have made things far more convincing.

Alternatively, if Phillips wanted to present a character who was so obviously damaged, why not actually cast a handicapped actor from Back to Back Theatre for example, to invest the role with credibility? Perhaps that might be too challenging for the MTC audience, to protect whom, The Pillowman is being staged outside its traditional home at the Arts Centre, and who have been explicitly warned that the play contains adult and disturbing themes and is most definitely not for children. (Maybe I'm jaded, or simply broad-minded having seen all manner of confronting, challenging and macabe works on stage and screen in my time, but I honestly didn't think there was much about The Pillowman that was confronting at all; any real frisson of horror was eliminated by the combination of the repetitive text and the leaden production.)

Other things that annoyed me about this latest MTC production included certain ostentatious and unnecessary elements of the set design, and the audience themselves, who laughed because they seemed to think they had to, because comedian Kim Gyngell was on stage, and not because the text warranted such a reaction. Too, I think the dark nature of the text evoked embaressed laughter, because people didn't know how else to react.

At this stage I'm unsure if I will go back and see the post-interval part of The Pillowman. As it stands, it ended on a note which I thought was a perfectly adequate ending for the story, which I didn't need to see ruined by another hour; rather like those Hollywood films which add ten minutes of happy ending to ruin an otherwise perfectly good story. Should I go back? You tell me. Should I not be reviewing a play I didn't see through to the end? Why not. Hating something so much I wanted to leave is a sure sign, in my mind, of a production to be avoided. Were I writing this review for The Age rather than my personal blog I would naturally have stayed until the end. As it is, Sean was also happy to leave, and we wandered out into the night; him home, and myself in the direction of a couple of bars...

Posted by richardwatts at 12:19 pm

I agree that the end of the first half was actually a perfectly acceptable ending to the play. The second half had a couple of really interesting and important twists, but it was more a case of building on what went before rather than adding new elements.

That said, I really enjoyed the show (despite its running time - actually closer to 3 hours 10 mins - rather than because of it).

I agree that acting and direction weren't that great, but there were certain layers to the text that keep me intrigued, mainly to do with the doubling of particular elements and the thematic echoes between the short stories and the various possible relationships and alternate histories being played out.

If you disliked the first half, though, you probably don't need to go back for seconds.

I wouldn't go back, Richard! I didn't have a problem with the production: it was a bit soft-edged (apparently the UK/US productions were rather more bloody) but myself, I really enjoyed the performances, which seemed to me right for that vaudeville dialogue. Just the play really pissed me off.

To be fair to Phillips, I've seen him do satire really well. He did the best Importance of Being Earnest I've ever seen - admittedly a long time ago, but it was glorious - and I also remember a pretty good Little Murders.

...we wandered out into the night; him home, and myself in the direction of a couple of bars...

I did wonder on the way home if you were going home to get some wholesome sleep like the modest, chaste, Christian that you are...

Glad I didn't stay out (for that deeply unsubtle production + poor audience performance or for other purposes) because I definitely caught a cold on the tram that morning and was feeling truly crap by Friday afternoon.

Yes, I am the phlegm-man, look upon my many hankies and despair!

I find it interesting that Philips also directed the truly appalling Entertaining Mr Sloane. That makes him director of thus far the two worst plays of the season. The humour in both was like being hit with a large piece of ham; certainly in the Pillowman he could not seem to figure out if he was directing black comedy or a truly dark piece of work.

And as mentioned, the playwright really should have visited an editor before this was let loose on the public; the whole thing could have been cut by a quarter or more and still retained its essence.

I just did the same thing. After an hour and a half, I was hoping that the blackout would be for bows, not interval.
Any kind heart able to give me the gist of the second act?

Valid comments Richard but a little perturbed that you can publicly review a show after only seeing half of it. If you paid for the ticket then I suppose, fair enough but if you were there on a freebie, I'd be inclined to be a little more careful in the way you attack it regardless of where your comments are posted.

Anonymous 31/5 - oddly enough, your comments echo almost exactly a criticism made of The Pillowman by a certain Malthouse staff member on the show's opening night. Could you possibly be one and the same person...?

Thank for sharing good and useful information. This information is very valuable.